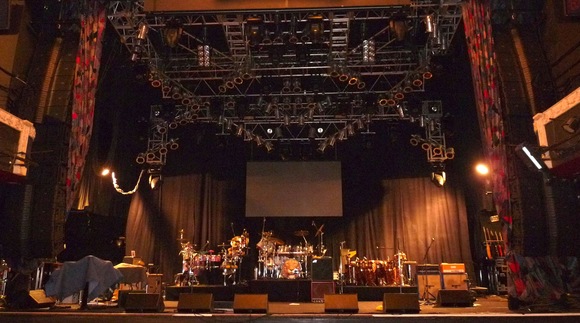 NORTHRIDGE, California – The House of Blues Las Vegas at the Mandalay Bay hotel is one of Las Vegas’ premier concert venues—and it just upped the ante with the installation of HARMAN’s JBL VTX Series line array. The House of Blues hosts major touring acts and will be home to a 2-year residency by Carlos Santana, performing his “Greatest Hits Live: Yesterday, Today and Tomorrow” through 2014. Sound Image of Escondido, California, designed and installed the JBL VTX system under the direction of Jason Schmidlapp, with support from Dave Kaiser of Sound Marketing West, HARMAN Professional’s regional sales rep firm.
The system includes two 13-box hangs of 10 VTX 25 line arrays and three VerTec® VT4880A fullsize arrayable subwoofers on each side of the stage, complemented by six ASB7128 subwoofers under the stage and six VerTec VT4886 subcompact line array elements for upper balcony fill. In addition, a JBL AC18 compact 2-way loudspeaker and ASB6112 compact 12-inch subwoofer are installed in each of the VIP suites.
“The House of Blues Las Vegas had gotten to the point where it really needed to upgrade its sound system,” said Dan Schartoff, VP of Production for House of Blues Entertainment. “The VTX boxes were a bit larger than the previous system so the suspension points had to change, and we also had to work around the room’s upper balcony. We had to move the array stacks slightly upstage and offstage to keep the sight lines to the stage clear. As it turned out, this enabled us to give patrons a better view of the stage since previously some of the speakers were stacked on the stage underneath the flown speakers. The better, more focused coverage of the VTX line arrays enabled us to eliminate the on-stage speakers while delivering much better sound.”
The upper balcony was a large hurdle to overcome, Schartoff noted. “The two array hangs are fairly close to the balcony, so we decided to install the subwoofers in the middle of both arrays. Six VTX V25 provide balcony coverage with three VT4880A flown in the middle of the array and four V25 for floor coverage,” he said. “The 13-box arrays were carefully designed to fit the available space and the bottom V25 enclosure of the balcony section is at the same elevation as the first row of the balcony, providing excellent off-axis coverage. The subwoofers are in the middle and close to the balcony surfaces, which helps to reduce reflections while at the same time allowing for improved under-balcony penetration since the lower V25 enclosures have line of sight coverage to the back of the room.”
The loudspeakers are powered by Crown IT 12000HD and XTi Series amplifiers. Loudspeaker management is performed via dbx DriveRack® 4800 speaker management systems. A Soundcraft Vi1 digital live sound console handles some front-of-house mixing duties. “We used HARMAN HiQnet System Architect™ software to do the setup and installation,” said Schmidlapp, “which really streamlined the whole process.”
“We were eager to do an installation with the new VTX line arrays as soon as we’d heard about them, and we bid on the House of Blues job, which would give us a great setting as a showcase room,” Schmidlapp noted. “If you’re going to go big, what better place to go big than Las Vegas? At the same time we were contracted to do the install, Carlos Santana was looking for someplace with a younger, hip clientele for his upcoming residency and chose the House of Blues. The timing wound up being perfect for us.”
The installation makes Sound Image the first company to install a JBL VTX system. “What a perfect deal—now, Santana is being showcased with the newest pro rig on the market,” Schmidlapp said. “I think Santana’s pretty impressed with it. Wait until you hear it!”
“Carlos Santana performing through a VTX line array system at the House of Blues Las Vegas is a match made in heaven,” said Paul Bauman, Senior Manager, Tour Sound for JBL Professional, who was instrumental in providing onsite support during the installation. “This project was truly a team effort under the guidance of Dan Schartoff and his team at Live Nation, coupled with Sound Image’s expert design and implementation and outstanding support from Sound Marketing West.”
“I can honestly say JBL hit the nail on the head with VTX—I can’t say enough about how good this box sounds,” said Rob Mailman, Touring Operations Manager for Sound Image and FOH engineer for Santana. “It is very transparent, solid throughout all bands and does really well not leaving me fatigued at the end of a long and loud show.”