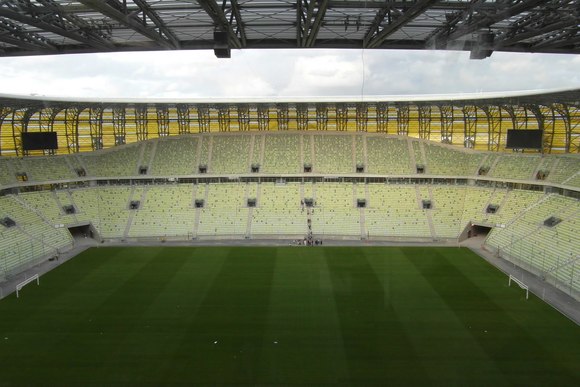 The stadium’s exterior is designed to resemble amber, which has long been extracted on the Baltic coast. ESS Audio provided the main public address system for the main bowl and stands as well as 40 VIP lounges, conference rooms and the stadium’s official pub.

The main system features 75 JBL PD5212-64 WRX weather-resistant loudspeakers (to handle the extreme weather coming off the Baltic Sea), set in 24 clusters of three for the stand coverage, while the remaining three single speakers broadcast onto the field.

The PA is powered by a total of 34 Crown CTs 3000 amplifiers equipped with PIP-USP3/CN cards to provide full network control. Signal processing is provided by a BSS Audio Soundweb London BLU-80 device, located in the audio control room and four BLU-32 devices set in each of the four amp rack positions. The design includes built-in redundancy, with a Crown CTs 3000 in each amp rack designated for emergency use (providing automatic changeover in the unlikely event of an amplifier failure). Each rack also includes a BSS Audio Soundweb London BLU-32 device.

“Despite a limited budget, the sound is excellent because of the HARMAN equipment, and the results of independent measurements showed excellent speech intelligibility and SPL,” stated director of ESS Audio, Witold Karalow.

HARMAN (www.harman.com) designs, manufactures and markets a wide range of audio and infotainment solutions for the automotive, consumer and professional markets – supported by 15 leading brands including AKG®, Harman Kardon®, Infinity®, JBL®, Lexicon® and Mark Levinson®. The Company is admired by audiophiles across multiple generations and supports leading professional entertainers and the venues where they perform. More than 20 million automobiles on the road today are equipped with HARMAN audio and infotainment systems. HARMAN has a workforce of about 12,000 people across the Americas, Europe and Asia, and reported sales of $3.8 billion for the twelve months ending June 30, 2011.