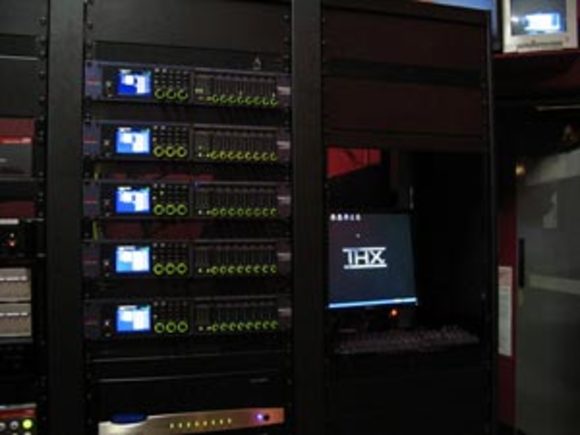 Winter NAMM 2007 Anaheim, CA, January, 2007- Booth#7800 — dbx® Professional Products, a Salt Lake City-based manufacturer of professional signal processing products and a division of Harman International, announces THX certification for the acclaimed dbx DriveRack® 4800 and 4820 System Processors. THX® Ltd., the company that has established the ultimate set of standards for cinema sound for nearly a quarter of a century, has fully tested and officially approved the DriveRack 4800 and 4820 for use in all THX-certified cinema system installations worldwide. The move now offers the power of the DriveRack processor, already a huge success in installed audio and live sound applications, to the elite THX cinema domain. The Empire Theater, a flagship film house in London’s Leicester Square since 1926, has become the first cinema to implement the dbx DriveRack 4800 System Processor in a THX-certified sound system, as part of the complete renovation of the theater’s sound system and acoustics.

According to Andrew M. Poulain, Professional Applications Engineer for THX Ltd. in San Rafael, CA, the DriveRack 4800 and 4820 now approved for use in THX-Certified Cinemas will be listed on the THX Approved Equipment List when the THX Specifications for Digital Crossovers is published in the near future. The DriveRack 4800 and 4820 are the ultimate systems processors; the units, which operate at up to 96 kHz, provide a wealth of EQ, delay, classic dbx compression and limiting, bandpass and crossover filters — features that are now extended to the world of high-end cinemas. In June, five of the DriveRack 4800 processors were specified and installed at the Empire Theater, which for 80 years has been the site of numerous movie premiers in the United Kingdom, including “Ben Hur.” As part of the Empire Theater’s new sound system, designed and installed by Bell Theater Services (BTS), the DriveRack units will manage a JBL 5.1 surround sound array that is fully THX-certified. Laurence Claydon, BTS’s digital cinema specialist and system designer, said his decision to opt for a digital infrastructure sold him on the DriveRack 4800. “I chose the DriveRack 4800 in part because it has eight outputs, allowing us to run a four-way stereo pair, as well as the 24-bit 96 kHz processing engine, which several movie companies are now requesting as standard spec,” he explains. “The fact that the DriveRack 4800 had also just been approved by THX was an additional bonus, and extremely timely!” Dale Sandberg, Senior Product Manager at dbx, states that the DriveRack 4800 and 4820 and the world of high-end cinema sound were made for each other. “We’re very pleased that THX, which has long set the bar for film sound throughout the world, has approved the dbx DriveRack systems processor for use in THX-certified cinema sound systems. We’re also gratified to hear how well it’s already working out in its first cinema installation, and that it’s been chosen for such a high-profile and historic theater. These events underscore the reputation that the DriveRack has established in a range of other applications, and they open the door to yet another market sector that will benefit from the DriveRack’s unique capabilities. Cinema sound keeps getting better and dbx will be a part of that.”