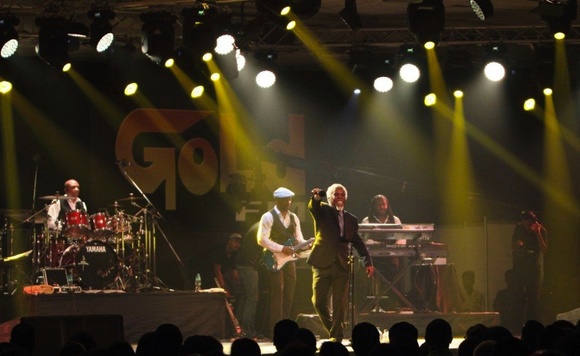 NORTHRIDGE, California – The island of Sri Lanka is probably one of the last places one would expect to find global stars as diverse as Billy Ocean and Olivia Newton John performing—and local production company, Universal Sound fielding a top-spec HARMAN’s JBL VERTEC® line array system.
But that’s precisely what Malinda Lowe’s company has been doing since setting up in 2009. The company recently rigged a JBL VERTEC line array system at the 5,000-capacitySri Lanka Exhibition and Convention Center for R&B singer Ocean’s sold-out show, and later supported two sell-out concerts by the UK/Australian songstress (and Grease star) Olivia Newton-John at the 1,800-capacity Musaeus Auditorium in Colombo.
With a large inventory of JBL VERTEC, VRX and SRX components (powered by a combination of Crown Macro-Tech MA12000i, MA90001 and MA5000i), Lowe’s company is perfectly positioned to handle the sound production for all ABC Radio Network’s international concert promotions (including Billy Ocean) as well as Wizard Entertainment, who promoted Olivia Newton-John.
A HARMAN Professional customer since setting up the company in 2009, Malinda Lowe is used to meeting production companies’ demands based on venue dimensions. “With Billy Ocean they wanted a minimum of six VT4888 each side—but the ceiling height in both cases was extremely low. So I used the VERTEC Line Array Calculator to predict coverage and SPL results for the large audience area and for the selection of correct locations for main hangs and side PA placements and system configuration.”
Instead, he used eight VT4888 midsize line array elements, configured in two main arrays of four per side, with six VT4882 ground-stacked subwoofers processed as an aux-fed mono sub configuration. The system was powered with Crown Macro-Tech amplifiers, processed via a dbx DriveRack 4800.
For the side PA, Universal Sound used four SRX 725/728 loudspeakers with dbx 260 processing and Crown XTi amplification for each side to cover the wide audience area, and for front fills the company used four VT4888’s with dedicated DriveRack 4800 processing and Crown MAi amplification.
For the Olivia Newton-John show, aimed at Colombo’s upmarket set, Universal had to work around the installed system and did not have hanging points or sufficient truss space to fly the VERTEC line arrays. The challenge was that the auditorium comprised a balcony with seating capacity for 700 and ground seating area for a further 1,100.
Since the production team wanted to fly the system to achieve an even coverage, the Line Array Calculator again provided accurate measurements. “We achieved even coverage, obtaining better frequency response and SPL with the VERTEC rig in a ground-stack configuration,” Lowe said. “The Calculator provided the accurate splay angle option for the maximum performance, with six VT4888 for each side ground stacked on a VT Array Frame and two VT4882 ground-stacked subs with aux-fed sub configuration.”
The system was powered by Crown MAi Series 5000, 9000, 12000 and processed using the dbx DriveRack 4800. Front fills comprised four JBL SRX712M’s with dedicated speaker processing on the DriveRack 260, accurately aligned to the main PA.
All amplification used for both productions was configured and monitored via HARMAN HiQnet System Architect™, with remote control.
The result was that both acts’ management, mixing engineers and musicians complimented the production company on the overall system performance, stating how well the VERTEC line arrays covered the rooms with its superior output power.
Said Olivia Newton-John’s FOH engineer, Jonathan Loeser, “I couldn't have done any of this without the system being top notch and accurate. That is very valuable to a touring engineer or production manager.”
All JBL product and local support, is provided by HARMAN Professional dealer Hi Fi Center Colombo.