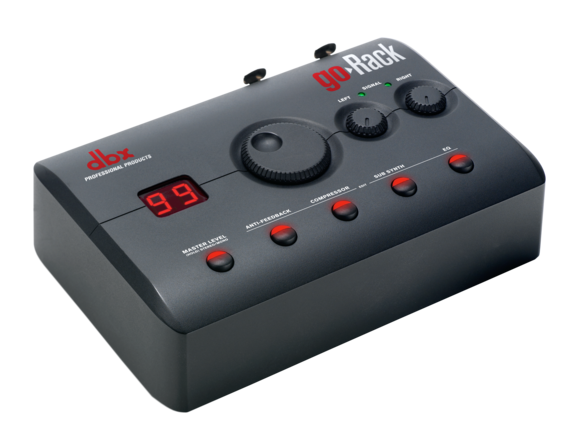 FRANKFURT, Germany – HARMAN’s dbx today announced the introduction of the goRack™ Performance Processor, an easy to use loudspeaker management processor that enables a portable PA system to be optimized for the best-possible sound quality. The goRack incorporates the best of dbx’s acclaimed DriveRack series processing simplified down to its purest form, in a sleek and compact unit that fits into the palm of the hand. “The dbx goRack boils all the essentials of our industry-leading DriveRack processors into an affordable product that is incredibly simple to use,” said Jason Kunz, Market Manager, Portable PA and Recording & Broadcast. “With the introduction of goRack, bands and musicians everywhere can now easily and significantly improve the sound of their PA.”

The dbx goRack connects between a mixer and an amplifier via its stereo inputs and outputs, which accommodate both XLR and 1/4-inch connectors. It can also be used as a stand-alone performance processor/mixer for a solo artist.

The dbx goRack Performance Processor will be available in July 2015 at a suggested street price of $99.95.

HARMAN (www.harman.com) designs, manufactures and markets premier audio, visual, infotainment and enterprise automation solutions for the automotive, consumer and professional markets. With leading brands including AKG®, Harman Kardon®, Infinity®, JBL®, Lexicon®, Mark Levinson ® and Revel®, the Company is admired by audiophiles, musicians and the entertainment venues where they perform. More than 25 million automobiles on the road today are equipped with HARMAN audio and infotainment systems. HARMAN has a workforce of approximately 17,600 people across the Americas, Europe, and Asia and reported sales of $5.9 billion during the last 12 months ended December 31, 2014.